Most excerpted from Killing History book

Was World War II a Battle between Capitalism and Socialism?

The little hidden secret about World War II is that it was a giant struggle between two opposing economic ideologies—capitalism and socialism. Unfortunately, the public is mostly unaware that the Nazi and Fascist ranks were chock-full of hardcore socialists and Marxist-lite ideologues. This was no accident. For decades the public had been indoctrinated by socialist academicians who falsely claimed that Fascist leaders were the captains of industry, controlling the people like puppet masters pulling the strings of Hitler and Mussolini.

This notion is purely pseudo-historical nonsense with no basis in fact. So, how do we know? It is easy. Just listen to what the German National Socialist and Italian Fascist leaders openly expressed. They were not squeamish about their pep talks to eradicate capitalism and economic liberty. For instance, Adolf Hitler himself pushed an extreme anti-capitalist narrative throughout many of his speeches, referring to “capitalistic people” as “unscrupulous exploitation of men.”

Joseph Goebbels, the Nazi Minister of Propaganda, was also a specialist devoted to spewing out not only the usual Nazi anti-capitalist rhetoric but explicitly pro-socialist visions for the future. Not long after the invasion of Poland in 1939, Goebbels framed the Nazis’ war with England in stark terms: “England is a capitalist democracy. Germany is a socialist people’s state.” Here, Goebbels proclaimed that the capitalists in England are the “richest men on earth. The broad masses, however, see little of this wealth.” In that same “England’s Guilt” speech, he throws more jabs at England’s tightfisted plutocracy as compared to Nazi Germany’s lavish support of social welfare programs, declaring: “It is also why English capitalists want to destroy Hitlerism. They see Hitlerism as all the generous social reforms that have occurred in Germany since 1933. The English plutocrats rightly fear that good things are contagious, that they could endanger English capitalism.”

To the National Socialists of Germany, wealth inequality was a horrendous injustice that had to be eliminated. Both German Nazis and Italian Fascists attempted to strengthen and enlarge their social safety nets via social justice programs. Hitler decreed the expulsion of all private charity, terminating all NGOs, and strove to end capitalism and the stock market in 1933. The lion’s share of Germany’s stock exchanges were closed, cut down from twenty-one to only nine by 1935. As these Hitlerites continued to nationalize commercial banks and industry, the government demanded registration of stock ownership, and to the limit the distribution of “dividends to 6 percent.” In 1936, laws were enacted that “prohibited the quotations of foreign stocks on German stock exchanges” and later “blocked foreign exchange dealing at the stock exchanges completely.”

A militant Marxist for decades, Mussolini boasted in 1934 to his Italian Chamber of Deputies that “Three-fourths of the Italian economy, industrial and agricultural, is in the hands of the state.” He often railed against capitalist nations in favor of “social justice”, declaring in a 1945 interview, “We are proletarian nations that rise up against the plutocrats.”

In fact, when Mussolini wanted to show his support for the Nazi-Soviet Pact of 1939, he told fellow Fascist official Giuseppe Bottai that the internal differences between Fascism and Bolshevism were minor, arguing that both Italian Fascism and Russian Bolshevism opposed the “demo-plutocratic capitalism of the western powers.”

Representing himself as a common “have-not” with no “ancestral estate,… bank account… stocks… or dividends,” Hitler was often more explicit in his hatred of capitalism and the bourgeoisie. Sometimes referring to the German bourgeois elites as “cowardly shits,” Hitler explained to Otto Wagener, the party’s economic advisor, that the business bourgeoisie “know nothing except their profit. ‘Fatherland’ is only a word for them.”

Earlier in a 1922 speech, Hitler promised that “Capitalism as a whole will now be destroyed.” One of his main reasons for wanting to destroy market capitalism and advance social justice was his contempt for “Jewish capitalism”, “unearned income”, and its unregulated financial markets. To Hitler and most socialists and Marxists of Europe, capitalism was a Jewish conspiracy of moneylenders, bankers, and financiers who were trying to control the world. During a 1940 speech in Berlin, he targeted capitalists as the enemy, declaring: “They are, after all, plutocracies in which a tiny clique of capitalists dominates the masses, and this, naturally, in close cooperation with international Jews and Freemasons.” In another speech in 1940, Hitler declared that his National Socialist movement had broken the “Jewish capitalist shackles imposed by plutocratic-democratic” nations, along with the “dwindling class of exploiters at home” in Germany.

Determined not to be outdone by Hitler’s anti-bourgeois and anti-Semitic rhetoric, Goebbels in his 1944 “Our Socialism” editorial wrote:  “the Jews are the incarnation of capitalism.” Even Nazi street posters blared out the Nazis’ anti-capitalism and anti-Jew screeds. One 1933 poster from Münster read:  “Because Adolf Hitler’s Third Reich wants social justice, big Jewish capitalism is the worst enemy of this Reich and its Führer.”

Hitler, who was once a red armband-wearing Communist and later a “Social Democrat” in 1919, also put World War II in terms of the proletarian nations engaging in the ultimate showdown against the western plutocracies propped up by capitalism. Bragging about his victorious 45-day battle against the western Allies in 1941, Hitler declared that “It is already war history how the German Armies defeated the legions of capitalism and plutocracy.” The Führer had framed World War II as a war between the socially-just proletariat nations and the Western capitalist nations, thus demonstrating the extent to which Hitler sought to destroy liberal capitalism.

Even members of the German military were exposed to this message. During the lead-up to Operation Barbarossa in 1941, many ideological lectures were given to German soldiers, such as one entitled: “Socialism against Plutocracy.” This hatred of capitalism was endemic at all levels in the Third Reich. Many National Socialist campaign pamphlets pushed a strong anti-capitalist narrative. One propaganda theme from 1932 warned German farmers that a big “danger is the American economic system—Big Capitalism; it means ‘world economic crisis,’ it means ‘eternal-interest-slavery’, it means that the world is nothing more than a bag of booty for Jewish finance in Wall Street, New York, and Paris,… it knows only profit and dividends.”

Often referring to Nazism and himself as “revolutionary socialists,” Goebbels was the leading cheerleader for nationalistic socialism, sounding the loudest death knell for capitalism. In a Nazi pamphlet first appearing in 1929, he attacked capitalism as a “rotten industrial system.” Confessing in his 1924 diary that he was “a German Communist,” Goebbels contended that he could simultaneously “love Germany and hate capitalism”, and that “only the annihilation of a system of exploitation carries with it the core of the rebirth of our people.” In other writings, Goebbels condemned “the money pigs of capitalism,” saying that “money is the curse of mankind.” At other times he angrily proclaimed that “The bourgeoisie has to yield to the working class … Whatever is about to fall should be pushed. We are all soldiers of the revolution. We want the workers’ victory over filthy lucre. That is socialism.”

Actually, Nazis were more socialist than even most Social Democrats, taking positions razor-close to Marxist sentiments. A 1925 New York Times article revealed Goebbels’s Marxist-lite outlook. In the news story, Goebbels is identified as the man who declared to a crowd in Chemnitz that “Lenin was the greatest man, second only to Hitler, and that the difference between communism and the Hitler faith was very slight.”

Luckily, the war between Hitler’s socialism and Western democratic capitalism ended in a victory for individual liberty. Some socialist historians still believe that Hitler’s anti-capitalist demagogy and practices were just a myth. But history has preserved large volumes of such historical records in great detail. If only more people, especially academicians, would examine such material without their socialist-based conflict of interest getting in the way.

Much of the material is excerpted from L.K. Samuels’ new book, Killing History: The False Left-Right Political Spectrum. 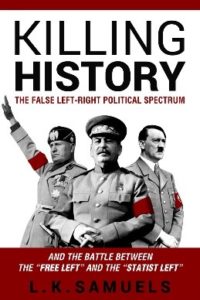